Beginner’s Guide on How to Predict Forex Movement

The foreign exchange (Forex) market is the largest market in the world. Every day, transactions worth more than a trillion dollars take place. Countries trade currencies, which affects their currency value. The main traders are international banks, commercial companies, central banks, hedge funds, retail forex brokers, etc. Knowing how to predict forex movement will determine if you are going to make any money in the markets.

Although, there are no fixed formulae on how to predict forex movement, following closely and keeping in mind the factors affecting a country’s currency, an individual can study the market. Below are some of the factors that can help you predict the market.

The government’s steps play an important role in deciding its currency’s value and how to predict forex movement. If the government of a country participates in its development willingly, its economy will grow. A growing economy is a stable economy, which means it is safer to invest in that country.

Even the country’s relations with other countries will affect its currency value. Moreover, a country’s smooth political functioning also attracts foreign investors.

If a country’s import level is higher than its export level, its debt will increase. To counter the debt, there will either be a rise in taxes and prices with the same purchasing power of its citizens, or, more debt will be taken. This will devalue the currency of that country. On the other hand, if the imports are higher, there will be more cash flow in the country, improving its currency value.

Just like you will invest your money in a high-interest paying bank, investors also like to invest in the currency of countries that offer higher interest rates. But for doing so, a country has to charge higher interest from its citizens. So, if the country is charging low-interest rates, investing in its currency would not be such a good idea.

Who would like to give loan to an indebted person? Similarly, investors do not wish to invest in countries with high debt. The debt can be due to its inability to pay for its projects and funding. In such a case, it will either ask for help from another country or print new currency. Both of which will negatively affect its currency value in the international market. 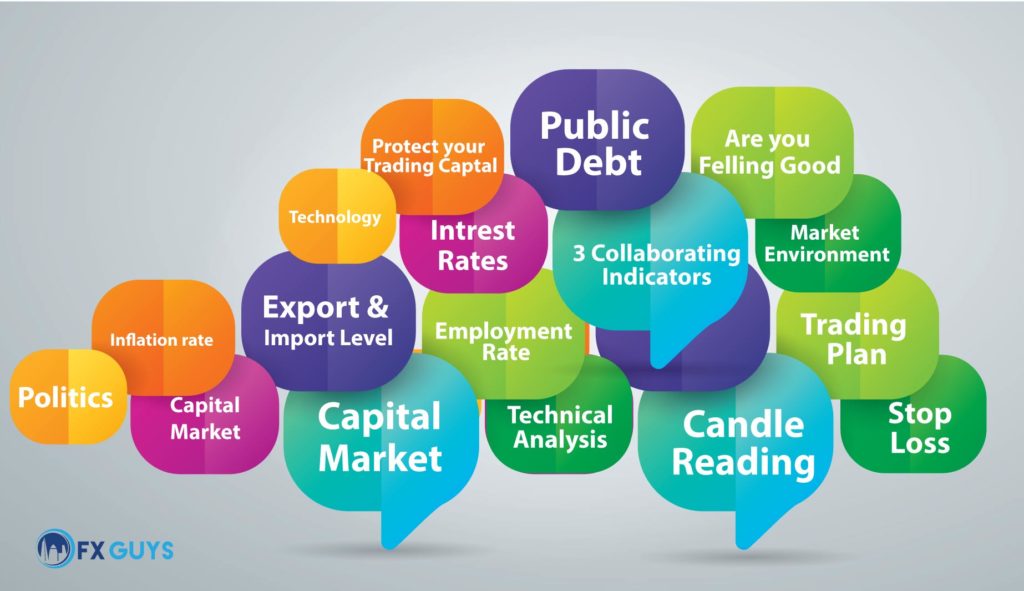 How to Predict Forex Movement by Reading Charts

While being aware of the things just mentioned above, you may also know how to predict forex movement by reading charts. This process is called Technical Analysis.

Candle patterns will give you a good indication of where the market may move next and also any number of technical analysis indicators that you can embed onto your chart such as Bollinger Bands, RSI. There are literally dozens of options to choose from.

For an in depth explanation on how to use technical indicators, check out our Technical Analysis category.

Always look for Collaboration and Confirmation when Trading

Never use any one single indicator to make a trading decision. Good practice is to base your trade on 3 collaborating independent indicators. Any single indicator may give you a false reading but 3 saying the same thing is a much safer bet.

YOU are important in all this!

Poor decisions are made when we are not feeling our best. Avoid trading if you are distracted, tired, hungry, emotional or if you feel in any way disempowered. Ensure you are well rested and of a sound mind when trading. If in any doubt, never go on a hunch, you can always wait for the next entry opportunity.