What is the foreign exchange market?

The Forex market is the largest and most liquid financial market in the world, with an estimated turnover of $6.6 trillion a day. The differences in the exchange rates are determined by demand and supply, which then, of course, determine the profit of traders.

The global market has two tiers; the first tier is the interbank, in which the most significant banks exchange currencies with one another. Even though there are only a few members, there are many traders. This dictates the value of the currency. The next tier is the over-the-counter market, which is where individuals and companies trade. The over-the-counter-market has become popular because many companies have now been given access to online trading platforms. New traders starting in the Forex market need only limited funds to know more about what Forex trading entails. The Forex industry is a risky one; it is not highly regulated and provides a lot of leverage.

The most significant geographic over-the-counter trading centre is located in the United Kingdom, with London as the dominant market. To understand the level of dominance, you will notice that the quoted price of some major currencies is the market price of London’s currency. As of April 2019, 43.1% of the total global trading was related to UK Forex trading alone. This highlights the fact that the UK accounts for the majority of global Forex trading.

What is the foreign exchange?

Foreign exchange trading is a contract between two parties. There are three types of trades:

The most actively traded currency is the US dollar with the most commonly traded pairs being the USD versus the euro, British pound, the Japanese yen, and the Swiss franc. One thing about the spot market is that it is volatile. Short-term movements dominate technical trading with the major focus being on the speed and direction of movement. People who focus more on the technical side of trading are known as chartists and long-term currency moves are driven by fundamental factors such as economic growth and interest rates.

Doing this means that you would face limited risk in the future and, irrespective of how the currency falls, you would not lose more than the forward price.

So, what is the foreign exchange? Here we explain this using an example.

A trader looks at the situation regarding the economies and has the view that the European Central Bank (ECB) will ease its monetary policy in the coming months as the economy of the Eurozone slows down. This makes the trader bet that the euro will fall against the US dollar and sells short €100,000 at an exchange rate of 1.15. Over several weeks, the ECB signals that it may ease its monetary policy, making the euro exchange rate fall to 1.10 versus the dollar, which means a profit of $5000 for the trader.

By shorting his initial €100,000, he got $115,000 for selling short. When the price of the euro fell, the trader covered his short, which cost him only $110,000 to repurchase the currency. The difference between the sale that was short and the purchase to cover it is the profit. If the euro had strengthened versus the dollar, there would have been a loss. 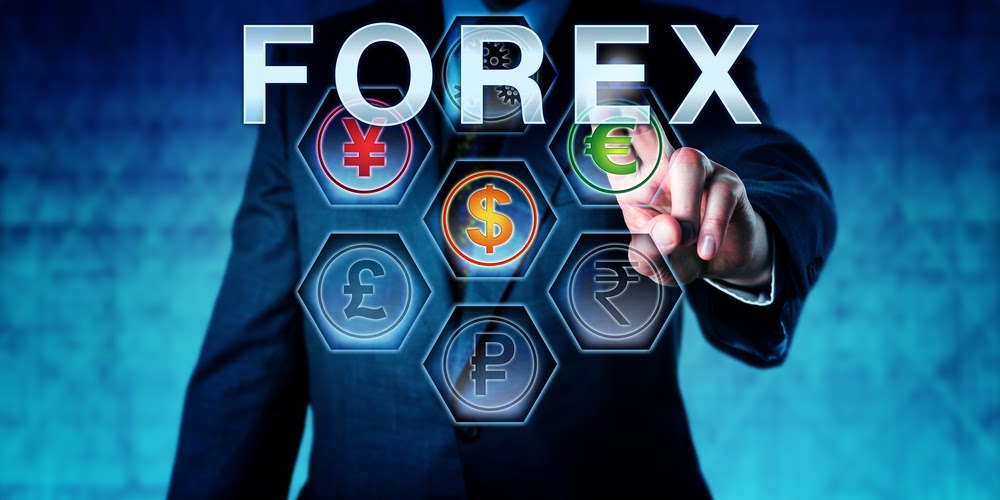 What is the foreign exchange interbank market?

The interbank market is a network of banks that come together to trade currencies. Each bank has a dealing desk at which they trade currencies with each other constantly; the purpose of this is to make sure that there is uniformity in exchange rates all over the world. In the interbank, the minimum amount that can be traded is 1 million of the trade currency with many more significant trades ranging between 10 million and 100 million. As a result, the interbank dictates the exchange rates.

The trades used in the interbank are the three trades highlighted previously. These banks also participate in the SWIFT – Society for World-Wide Interbank Financial Telecommunications – a market that allows them to make foreign exchange transfers to one another. These banks trade to create a profile for themselves as well as their clients; when they trade for themselves, it is known as ‘proprietary trading’. The bank customers include large corporations, wealthy individuals, hedge funds, sovereign wealth funds, and the government.

The list in the following table shows the ten biggest players in the foreign exchange market according to an FX survey carried out in 2018:

A list showing the ten major players in the foreign exchange market.

What is the foreign exchange retail market?

The role of the central banks

Even though central banks do not regularly trade currencies in the foreign exchange market, they still have a significant amount of influence in the market and in how things are run. Central Banks are in control of billions in foreign exchange reserves, which makes them a force to be reckoned with. An example is Japan, which holds about $1.3 trillion; it is are paid mostly in US dollars.

Japan, like other central banks, could trade its currency Yen for dollars when it wants a drop in value. This makes the Japanese export value cheaper, and is Japan’s preferred method for raising and lowering interest rates to affect the value of its currency.

What are the myths about the foreign exchange?

In terms of making money and other endeavours, there are rumours, myths, and legends everywhere. The Forex market is just the same; there are many myths and rumours about it. A new Forex trader is likely to know about most of these rumours and this is likely to shape the way he thinks about trading. Here are some popular Forex myths:

Forex is a journey and not a destination and the sooner you realise this, the better. If you take on the destination mentality, then you would think of it as a get rich scheme rather than a business that you must learn, understand, and grow. As a trader, you make money by analysing trends and making wise decisions. Gaining one trade is a single step in a journey of many steps towards the achievement of your long-term goals.

If traders are asked what the foreign exchange market is, many will tell you that it is a rigged market. You hear traders complaining that the market is against them and that every trade they make is a losing trade. They blame the interbank, the timing, the broker, and the government for their loss. Sometimes foreign exchange rates change often and are too volatile to be rigged. The Forex market is not a market for everyone, particularly those who do not know what making money in the market entails. Therefore, blaming everyone for your loss is not the best way to go. You have to learn how to trade and make sure that you learn from your mistakes.

Many companies try to deceive traders about trading formulas they can use to make a profit and regularly win trades, but, to be honest, that is not an honest statement. Anyone who tells you that the market mystery has been solved is not being truthful; it is like saying that there is a formula for winning the lotto, which is untrue.

This is one of the most popular myths in the Forex system today. There are many experts today showing traders their own methods of trading and pointing out that that is the best and the only way to trade. You must understand that even some of the best traders make mistakes, which means that what they say cannot always be trusted.

The foreign exchange market is a big market and for most people in this huge, versatile market, information is critical. As a new trader, or as someone who knows a thing or two about the market, the gathering of useful information is the one non-negotiable factor.

Knowledge determines your rate of success or failure in the Forex market. Trading psychology must also be considered. This means that you have to have a winning mentality to win a trade. Many do everything right but not have this winning mentality; without it, you will not make the most out of your trading adventure.