In a nutshell, Bitcoin Mining is the process of using computer hardware to carry out mathematical calculations to make bitcoin transactions and increase the security of the Bitcoin network. Bitcoin miners are awarded transaction fees and new Bitcoins.

Bitcoin miners really perform two jobs; accountant and miner. They use computers to dig for the gold (bitcoin mining) and also confirm the transactions and increase the security of the Bitcoin network (the accountant aspect of the role).

There are countless miners constantly working across the globe – it is a twentieth-century industry that is completely decentralised and pretty much self-regulated. 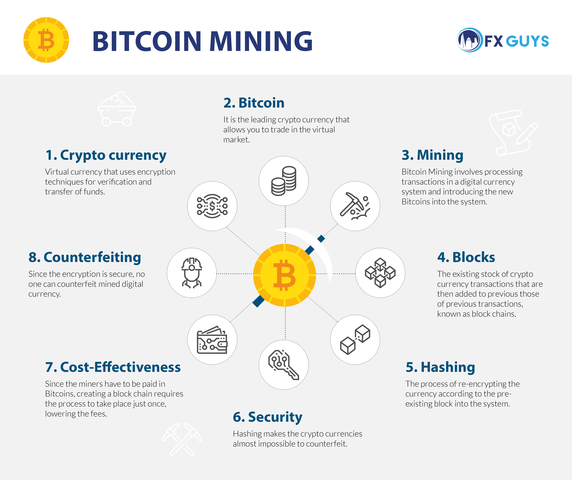 Where does the blockchain come in?

A block is a link or digital record in the blockchain that contains and confirms numerous pending transactions. A new block is confirmed by miners approximately every 10 minutes.

However, the work of mining is also a lottery: who can decrypt or find the next block first and add it to the network. The “winner” is paid in bitcoins and the found block is subsequently added to the blockchain. This generally happens every ten minutes with Bitcoin.

The more power a miner has, the faster they will be able to guess the numbers and the faster the block can be added to the network. The more miners there are, the harder it becomes for individuals to mine bitcoins. That’s why mining pools have developed, where miners work together and are remunerated proportionally for their hash rate. Some mining pools are enormous. One of the largest is the F2 Pool, Bitfury (one of the 2 largest Bitcoin hardware manufacturers in the world). If you plan to invest in one of these pools you need a capital of millions.

The amount of distributed Bitcoins halves approximately every four years until the time when the limit of 21 million Bitcoins is finally reached. This will happen in 2140, after which miners will be paid via transaction fees.

Is it worth investing in Bitcoin?

In principle, everyone can become a Bitcoin miner – even with a laptop, although Android smartphones won’t work. However, an important factor to consider is the cost of electricity and hardware. Most mining today is performed in large industrial warehouses filled with powerful hardware. The cold reality is that unless you join a Bitcoin pool, you will be unlikely to generate a profit. If you can afford to invest in a Bitcoin mining team, however, it could well turn out to be a profitable venture.